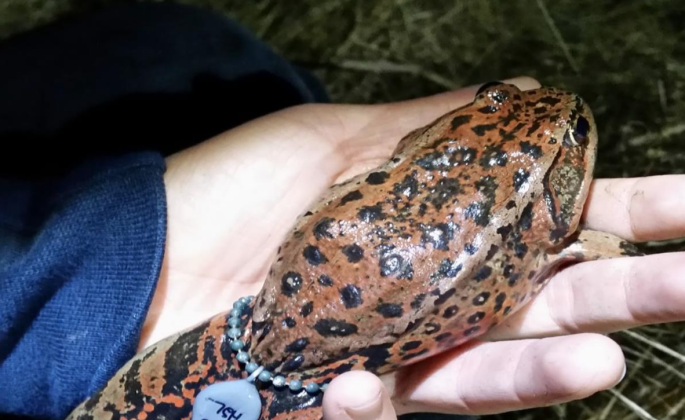 DeFrancesca et al 2016: The top of Sonoma Mountain is designated critical habitat for threatened red-legged frogs. Over a dozen ponds within the area have potential to support breeding. We study how abundance and distribution vary with habitat.

Pinto et al 2017: To determine the suitability of habitat for red-legged frogs, we assessed negation and water quality of three bodies of water at the Fairfield Osborn Preserve: Kelly Pond, the vernal pool, and Turtle Pond.

Jain et al 2018: Sonoma Mountain is characterized as critical habitat for the threatened red-legged frog. We are exploring habitat requirements for this species and how they vary among types of aquatic habitat. .​

Surber et al 2019: Research on animal movement patterns and factors that influence these patterns is vital to conservation of endangered species. The California red-legged frog (R. draytonii) is a threatened species native to California. Their rapid decline has been largely attributed to habitat loss and introduction of invasive species, including the American bullfrog (L. catesbeianus). The goal of our study was to better understand the movement patterns of red-legged frogs by asking if 1) bullfrogs or 2) rainfall and season had a significant effect on adult red-legged frog movement rate or distance. Red-legged frogs and bullfrogs were tracked via telemetry from May 2017 to June 2018 on Sonoma Mountain. Preliminary results have indicated that season influences red-legged frog movement distance. Bullfrog and rainfall impacts are still undergoing analysis. The results of this project can potentially be used to determine the pathway size buffers necessary to protect and manage red-legged frog movement.