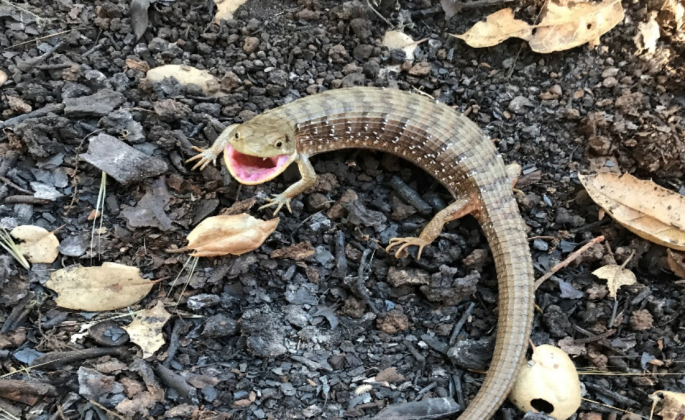 Northern California was devastated as several major fires tore through Sonoma County and the surrounding areas in October 2017. The Tubbs Fire, that burned over 36,000 acres of Santa Rosa, became the most destructive fire in California history. Among the areas affected by this fire, Pepperwood Preserve, a 3,200-acre ecosystem located in the Mayacamas Mountains, was heavily impacted with over 95% of the preserve burnt.

Cimmiyotti et al 2018: We examined the effects of the North Bay Fires on the southern alligator lizards, western skink, and western fence lizard.

Moore et al 2019: This research examines the preliminary effects this natural disaster on habitat usage by Northern Californian herpetofauna species. By surveying coverboards along specific transects in three different habitat types (Grassland, Canopy Edge, and Forest) at two ephemeral ponds within the preserve, we compared measures of community composition from data collected pre-fire and post-fire to see if there were any initial impacts on habitat use in these key indicator species. Preliminary data indicated that there was a significant increase in overall abundance as well as a difference in pattern of habitat use in E. multicarnata directly after the wildfire. With the largest shift happening in the Canopy edge habitat. The abundance in E. multicarnata returned to pre-fire levels in both the forest and grassland habitats during the second year after the fire (2018-2019), but the canopy edge habitat still showed significantly higher levels of abundance than pre-fire, although these levels were lower than 2017-2018. The pattern of habitat use by P. skiltonianus and B. attunuatus did not appear to be altered when comparing the pre/post fire data. We recommend that cover board surveys continue to be conducted for the foreseeable future with results compared to climatic data (i.e. soil moisture, ambient temperature, soil salinity, etc.) for these and additional herpetofauna species.