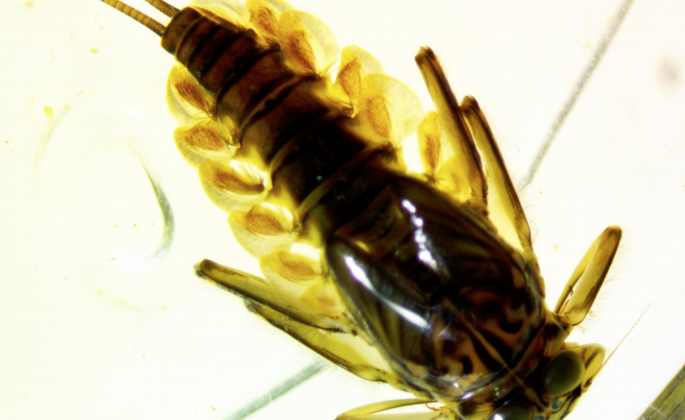 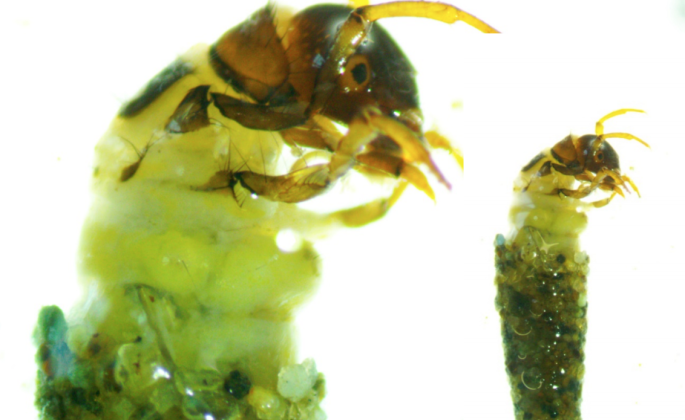 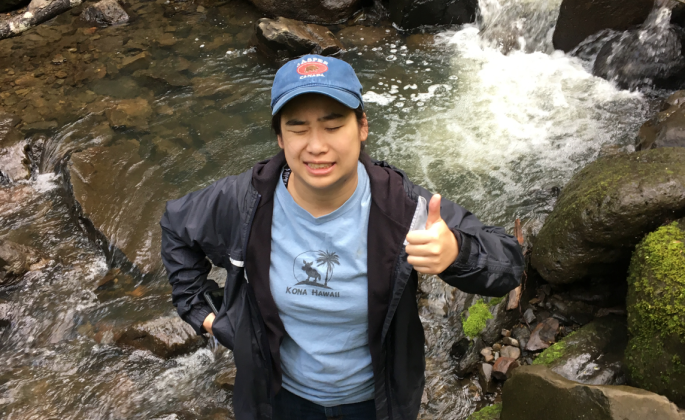 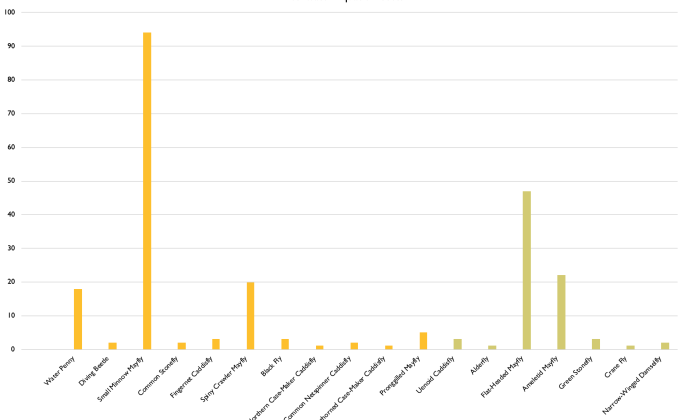 Abundance of each species collected. Species in orange were also found in Serpa’s research; species in green were not abundant during his research. 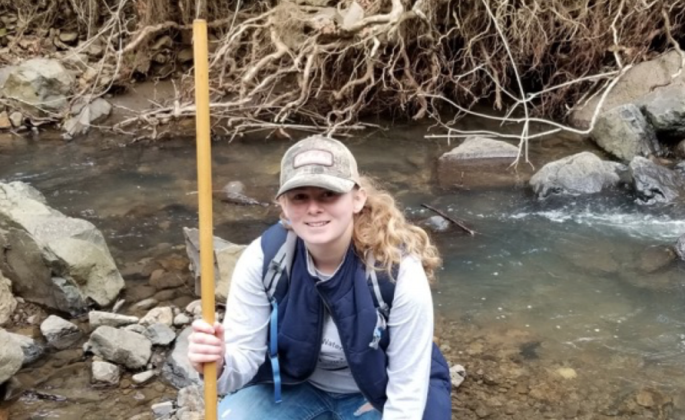 Aquatic macroinvertebrates that live on, under, and around rocks and sediments at the bottom of streams, are critically important to the function of many ecosystems throughout the world. Many of these species are known to be sensitive to water quality and can only survive in areas that are relatively free of pollution. Additionally, many insect populations have been shown to be decreasing. Comparing current insect populations to historical ones can help us understand this problem.

Lozano et al 2019: In order to assess how the change in environment conditions over time might affect the diversity of macroinvertebrates, we collected specimens on the stretch of Copeland Creek that bisects the Sonoma State University campus and compared them with specimens collected in previous years. After identifying these specimens, we assessed the species diversity and pollution tolerance in Copeland Creek, along with other factors such as temperature and precipitation. We found species across a wide range of pollution tolerances, including many that are known to be extremely pollution intolerant. We also found that there was no significant difference in the community of benthic macroinvertebrates found on the SSU campus across the years of our study. This suggests that water quality has remained consistently high. This data we  collected will be useful in better understanding factors that determine the community structure of aquatic macroinvertebrates under different environmental conditions.

May et al 2019: We compared the species richness of benthic macroinvertebrates (BMI) at two areas on Copeland Creek. We propose that there will be greater species richness in the upstream section located at the Fairfield Osborn Preserve than in the downstream section that runs through the main SSU campus, due to the higher elevation and subsequent cooler temperatures at the Preserve. We collected BMI samples using nets to skim the creek substrate, preserved the specimens in alcohol, and identified them in the laboratory. Collection sites were chosen to control for a similar level of canopy cover; we also measured air temperature, substrate material, steam contour, and elevation at each site. Our results will also shed light on the relative health of the aquatic community at each site, based on the pollution tolerance of the species sampled.

Morales et al 2019: “A Rearing Imperative: Associating Immature and Adult Stream Insects”, a Sonoma State University master's thesis written by Lawrence Serpa, has an outstanding inventory of every stream insect found with descriptions, locations, and abundances at Fairfield Osborn Preserve. I visited the preserve 5 times, including one preliminary visitation, to sample freshwater aquatic insects. I searched for insects described in Lawrence Serpa's thesis, specifically those most prevalent in spring and easily identifiable, and compared my findings to Serpa's. We concluded that while there have been changes in abundance since 1980, there were many species that were able to retain abundance. Nearly all of the common species I found in my study were already abundant when Serpa conducted his thesis research. Given the data gathered, this could provide insight into how Fairfield Osborn Preserve is able to prevent ecological changes that have been happening in unprotected areas.

Arreola et al 2019: We sampled three stream sites at the Osborn Preserve to assess water quality, and compare the macro invertebrate community present with that documented by Lawrence Serpa in the 1980s. We found pollution intolerant species which suggests that all three sources have good water quality.